For the settlers of an area of Duxbury known as Mattakeesett, a Massachusett word meaning “Place of much fish,” worship was difficult as the nearest meeting houses were 20 miles away. Public worship began in an old Huguenot orchard, earning it the name "Sabbaday Orchard, " and the first meeting house was likely erected there around 1708, though there are two competing accounts regarding the specifics of this earliest meeting house. On March 21, 1712, the town of Pembroke, which encompassed the whole of Mattakeesett, was incorporated. As a part of that act, the new town agreed to "procure and settle an orthodox, learned minister of good conversation." The First Church in Pembroke was organized October 22, 1712 and its first minister, Daniel Lewis, was ordained December 3, 1712. Sometime before 1717, the congregation moved to the Common and in 1717 this meeting house was enlarged to accommodate members of the Massachusett tribe. Under Lewis, a Calvinist, the parish flourished and again in 1727 a larger, meeting house was built. Pembroke was split into an East and West Parish in 1748; the Second Church was gathered that same year in the West Parish. Lewis’s ministry ended with his death on June 29, 1753.

The First Church continued to flourish under the ministry of Thomas Smith who was ordained December 4, 1754. Unlike his predecessor, Smith was a relative religious liberal. Under his ministry, the parish swelled so that finding a place to sit was often impossible and in 1763 the meeting house was again expanded. On December 28, 1772, at a meeting of the whole town held in the second meeting house, the Pembroke Resolves were penned and approved by vote, representing "the first public declaration contemplating political independence of Europe by an American assembly." Late in Smith’s ministry, a separation occurred within the parish due to disagreements over Smith’s liberalization of church music. 1787 was the final year of Smith’s ministry; due to the loss of his sight he was assisted by Kilborn Whitman who would succeed Smith and was ordained in December of 1787. Smith passed away on July 7 1788.

In 1820 the West Parish in Pembroke was incorporated as the town of Hanson and the Second Church was renamed at that times. The First Parish remained largely unchanged until December of 1836, during the ministry of Morrill Allen, when the second meeting house was condemned and ordered to be taken down. The meeting house was torn down and the third, and final, meeting house was constructed and dedicated on the same lot by the end of 1837. As part of this construction, a bell and clock were installed in the belfry. The clock was a gift to the Town of Pembroke by Rev. Allen. The bell cracked in 1839 while ringing for a fire marshal and a new one was installed that same year. Allen, famed for his frequent agricultural writings, was the longest serving minister of the First Church, having served nearly 41 years before he departed in 1841 to run for office as a Massachusetts state senator. After Rev. Allen’s departure, the First Church joined the Unitarian denomination. In 1868, another separation occurred within the parish, this time over the installation of an organ from the Organ Fund Society. On April 8, 1893, lighting struck the belfry, causing extensive damage to the church. These damages were repaired by the fall when the church was rededicated.

In large part due to declining membership and other financial difficulties, only exasperated by United States entering World War II, the third meeting house fell into disrepair during the first half of the twentieth-century. Ten women formed the Church Restoration Committee and borrowed $1,000 (approximately the equivalent of $17,000 in 2017) to begin a major restoration project in 1947. Less than a year later, the debt was paid off. In 1958, a house was purchased by the First Church to be used as a parsonage. Once again, lightning struck the First Church in 1985; this time the damages were repaired with the help of the Town of Pembroke as part of its efforts to refurbish the clock. In 1964 the First Church rejoined the Congregational denomination and in 1986 the First Church voted to join with the United Church of Christ. In 1989 the ladies of the First Parish Sewing Circle donated their building to the First Church to be used for Sunday-school classes. The First Church in Pembroke continues to serve the local community today.

The digital records below document the early history and life of the church, including membership lists, administrative and financial records, and church correspondence.

Find out more about Pembroke, Massachusetts. First Church records, 1712-1887. View this collection's finding aid at the Congregational Library and Archives 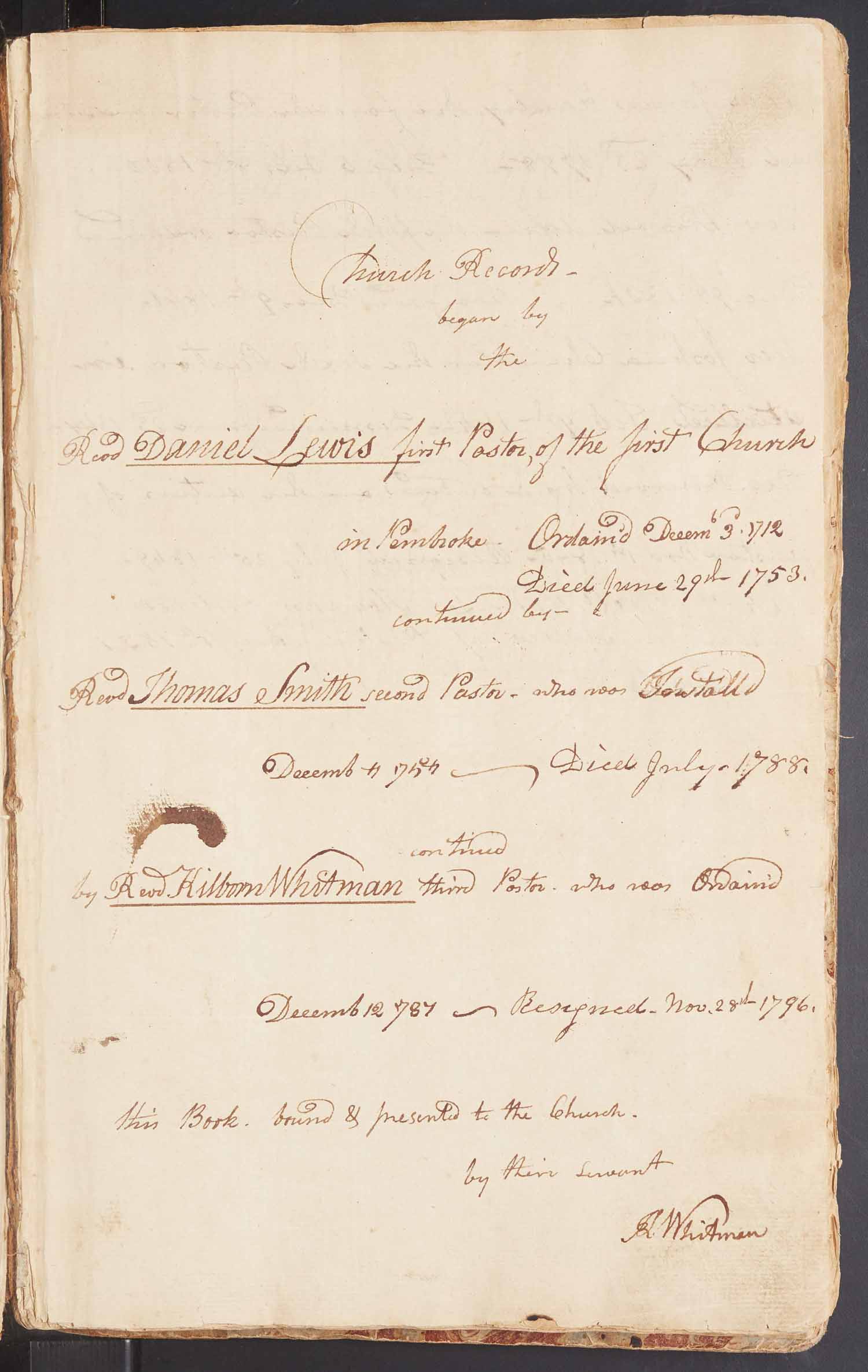