The history of the West Parish Congregational church begins with the gathering of a small non-conformist church in Southwark, London, 1616. At the gathering of that church Henry Jacob was appointed as pastor. Henry Jacob resigned from the church in 1622 in order to travel to Jamestown, Virginia, where he died in 1624. Henry Jacob’s successor was Rev. John Lothrop, a young Oxford graduate and strong proponent of the separation of church and state. In 1632, while gathered for worship in a private home, Lothrop and the members of the church present, were arrested for their non-conformist beliefs. During their imprisonment, Rev. Lothrop’s wife died from medical complications. In the summer of 1634, Lothrop was released from prison on the condition of his banishment; by September of 1634 Lothrop and approximately 30 members of the Southwark Church arrived in Boston.

The members of the Southwark church initially settled in Scituate, a small settlement in the Plymouth Colony. Discord between the members of the Southwark Church and the other Plymouth Colony settlers quickly developed over the distribution of land and the issue of baptism. Lothrop petitioned the General Court for resettlement and in June of 1638 the Court offered Lothrop and his church land in the recently settled Mattakeese, now Barnstable. They arrived in October of 1639, a month after the town of Barnstable was officially incorporated.

Barnstable had initially been settled by another puritan minister, Rev. Joseph Hull. The early settlement could not support two congregations and the Southwark Church outnumbered Hull’s. Further, some of the members of Hull’s congregation switched and joined the Southwark Church. The result was that shortly after Lothrop’s settlement in Barnstable, Hull moved to Yarmouth and left the religious administration of the new settlement to Lothrop. This marked the official gathering of the Parish Church in Barnstable. Within three years of their settlement construction on the first meeting house began; construction was completed in 1644. This building continues to stand today and is a part of the Sturgis Library in Barnstable.

Rev. Lothrop died in 1653. Discord within the church lasted until 1663 when Thomas Walley was settled as the second minister. He served as pastor until 1673 when he died. Another ten year period of discord followed until the settlement of Johnathan Russell in 1683. He was succeeded by his son, Johnathan Russell II in 1712. By 1712 Barnstable had grown significantly and some members of the parish began to push for a division of Barnstable into an East and West Parish. Johnathan Russell II attempted to thwart this decision but in 1715 the town voted for the division and an Ecclesiastical Council made permanent the town vote. The Parish Church in Barnstable became the West Parish Church in 1717 while the East Parish Church officially was gathered as a new church in 1723. Construction on the second meeting house began in 1717 and was completed in 1719.

The meeting house was enlarged in 1723. During the enlargement, a new bell tower was added to the building as well as a gilded cock weathervane that had been ordered from England. In the early 1760s, the newly installed minister, Rev. Oakes Shaw purchased a home which later became the parsonage. By 1852 the meeting house had fallen into disrepair. However, the church was poor, largely due to the decreased prosperity of Barnstable and the greater number of churches present in the town, so instead of building a new meeting house, the church voted to completely renovate the meeting house. During the ministry of Rev. Henry A. Goodhue (1863-1883), Goodhue maintained a small school in the vestry of the meeting house.

The economic situation of the church continued to deteriorate into the twentieth-century. In 1920 the church voted to work with the South Congregational Church in Centerville to share a single minister between the two churches. Both churches were struggling financially and had been constant beneficiaries of home mission aid. This relationship stood unchanged until 1957. By 1950 the church building had once again fallen into significant disrepair. Largely due to the efforts of Elizabeth Jenkins, a member of the church, the West Parish Memorial Foundation was incorporated in 1950 with the mission of raising $100,000 to fully restore the church to its 1719 form. In 1953 work on the restoration began and continued until 1958 with the installation of an organ. During the 1950s the church joined the United Church of Christ. In 1962 the West Parish Church merged with the West Barnstable Finnish Congregational Church. 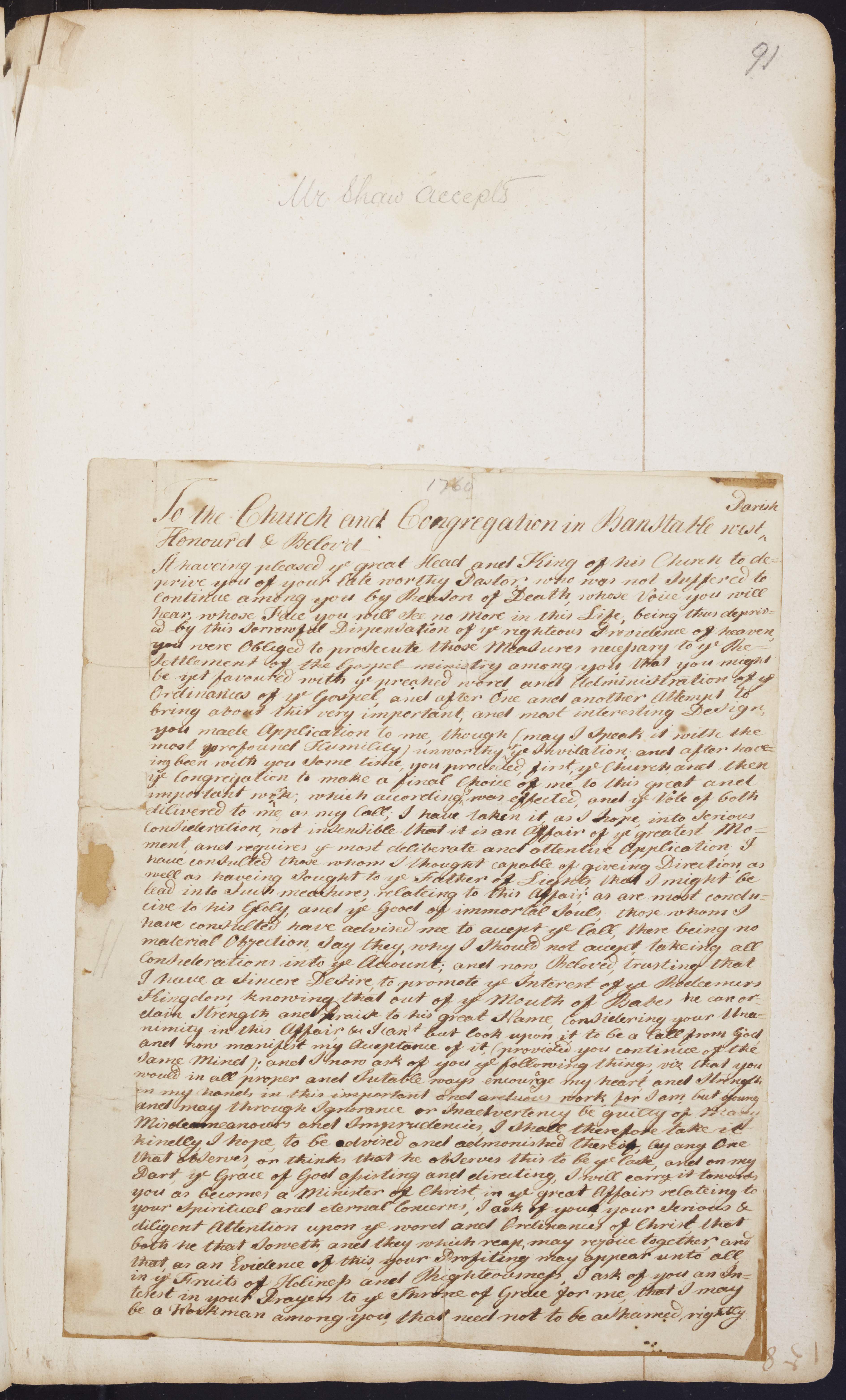