Strict Congregationalists, also known as Separates, arose after the religious revivals of the First Great Awakening of 1740. The denomination emerged in the frontier areas of eastern Connecticut before taking hold elsewhere in New England. Separate churches positioned themselves in opposition to Connecticut’s Saybrook Platform, which was adopted in 1743 as official Connecticut state policy. The platform created a state-sponsored consociation, a church hierarchy similar to a presbytery to which local churches were made to refer for new ordinations and other matters. The state also discouraged discrimination in the admission of church members, largely because civic rights such as office-holding were contingent upon church membership.

Strict Congregationalist adhered to the original Cambridge Platform which mandated that church members must “manifest their faith & repentance by an open profession thereof, before they are received to the Lord’s Supper, & otherwise not to be admitted there unto.” They believed they were upholding the Pure Church of the early Puritans, a “society of visible saints” in an era of reforms and perceived religious backsliding. Their grievances also included the widespread adoption of the halfway covenant in the early 1700s, which allowed for infant baptism, and theologies of salvation by good works rather than justification by faith alone.

The movement is first attested in New London, Connecticut in 1742, with the creation of a Separate Society formed on March 6, 1743. This was followed by the creation of Separate churches in Canterbury (1744), Mansfield (1745), and Plainfield (1746), and later in North Stonington, South Killingly, Windham, Preston, Norwich, Enfield, Wethersfield and Middletown, and New Milford.

While these churches met in mutual council for special occasions such as ordinations and disciplinary hearings, they were not united into an official Strict Church denomination until 1781, when the first Strict Congregational Convention was held at Killingly, CT on September 19. At this meeting, members resolved “that we will have a General Meeting of our several Churches, by Delegation, annually on the Third Wednesday of September… In order to maintain Fellowship and Union among the Churches, and for the Assistance of each other, in some difficult Cases.”

The collections below comprise the records of the Strict Congregational Convention of Connecticut, created after this initial 1781 meeting and continuing until 1811. They primarily consist of annual convention proceedings, but also include correspondence between individual churches and the Convention, disciplinary proceedings, and theological essays. Local churches writing to the convention include Preston, Plainfield, Killingly, Canterbury, Lyme, Canaan, South Groton, North Groton, Waterbury, Stonington, New Milford, Enfield, Montville, Voluntown, and the Second Church at Middletown in Connecticut, and the Presbytery of Morris County, NJ, as well as the Strict Congregational Church in the Oblong. The collection also includes financial records of the Second Strict Congregational Church of Middletown, where Benjamin Graves served as pastor or elder, 1804-1812.

Find out more about Strict Congregational Convention of Connecticut records, 1773-1811. View this collection's catalog record at the Connecticut Historical Society 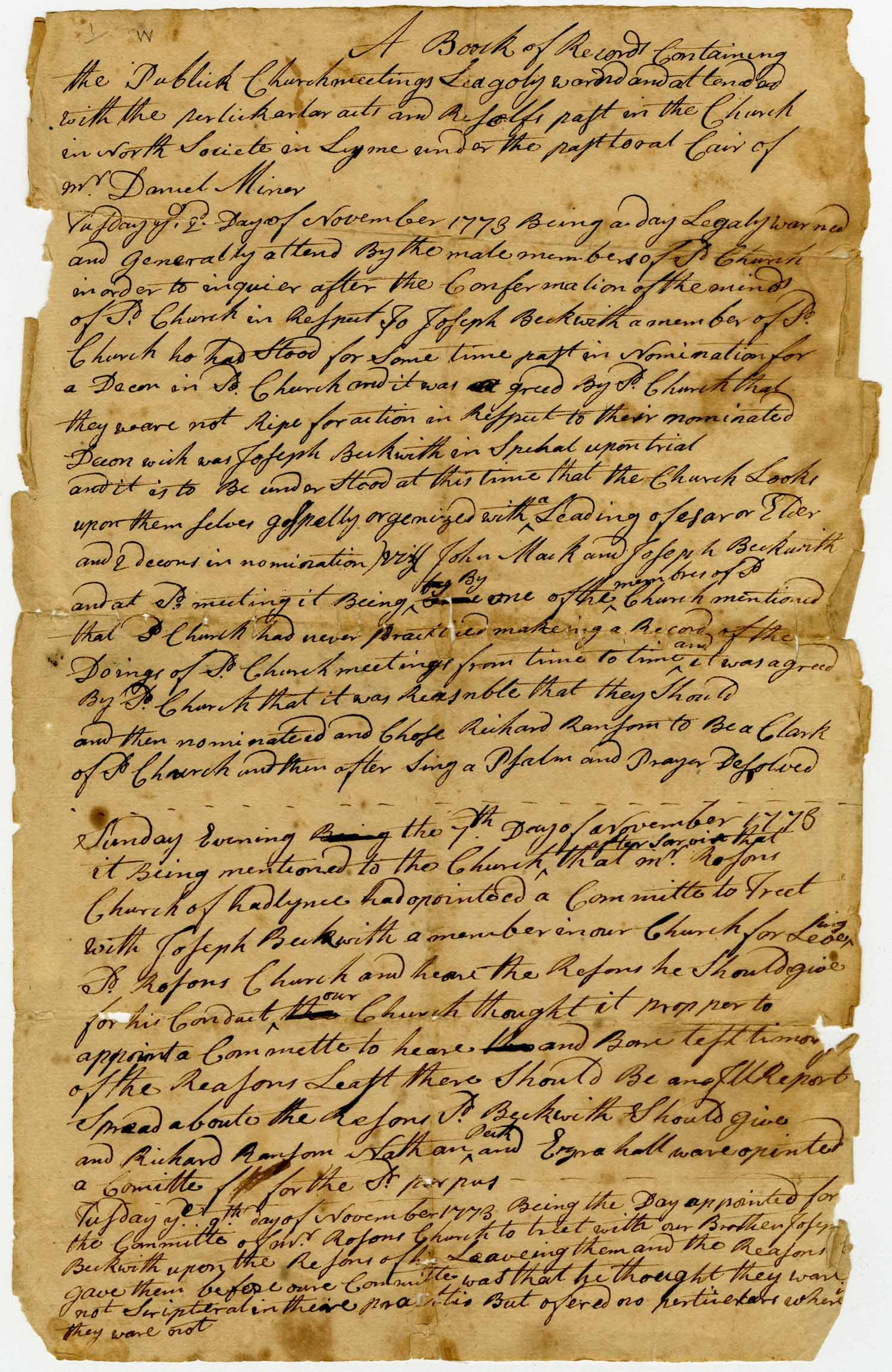