The town of Arlington, Massachusetts, was originally a village within the boundaries of Cambridge named Menotomy, an Algonquin-language word meaning "swift running water." In 1725, citing the long distance required to attend worship services, a group of parishioners from the First Church of Christ in Cambridge requested that a precinct be formed in Menotomy so that a new church could be gathered. This initial request was denied. Subsequent requests were brought to the General Court and in 1732 they ruled that Menotomy would become the Norwest Precinct of Cambridge.

Construction on the first meetinghouse was completed in 1734. In 1735 the search for a permanent minister was begun; the search did not end until 1739 when Rev. Samuel Cook agreed to become the first minister. With Rev. Cook installed, the church was formally gathered on September 9, 1739. In 1805 the second meeting house was constructed. Two years later, in 1805, Manotomy village was incorporated as the independent town of West Cambridge.

In 1829 the church called Rev. Frederick Hodge, a Unitarian. In the wake of Hodge’s installation, some members left the parish on order to form the Pleasant Street Congregational Church. In 1833 there was a parish meeting where a resolution to designate the church as Universalist was introduced and passed. The following week, another meeting took place and the previous resolution was overturned. The split in the parish led to those advocating a conversion to Universalism leaving the parish to form their own church.

The third meeting house was constructed in 1840. That meeting house was destroyed in a fire on January 1, 1855. Construction on the fourth meeting house was completed that same year. The meeting house drew on Victorian architectural design and included a steeple; the town paid for the steeple to include, in its design, a clock with four faces. In 1867 the town of West Cambridge was renamed to Arlington; at that time the name of the church was changed to First Congregational Church in Arlington.

Throughout the latter half of the nineteenth-century, and well into the twentieth century, the parish community was largely split between conservative and progressive factions; this resulted in the short ministerial services of a number of pastors during this time. In 1961 the Unitarian and Universalist denominations merged. As a result, First Church and the Universalist church, which had split from First in 1833, began to talk of reuniting the churches. That merge happened in 1965 and the church was renamed to the First Parish Unitarian Universalist Church. In 1975 the fourth meeting house was destroyed in a fire. The fifth, and final, meeting house, was constructed shortly thereafter. The First Parish Unitarian Universalist of Arlington continues to serve the local community today.

Find out more about Cambridge, Massachusetts. Second Church covenant, 1739. View this collection's finding aid at the Congregational Library and Archives 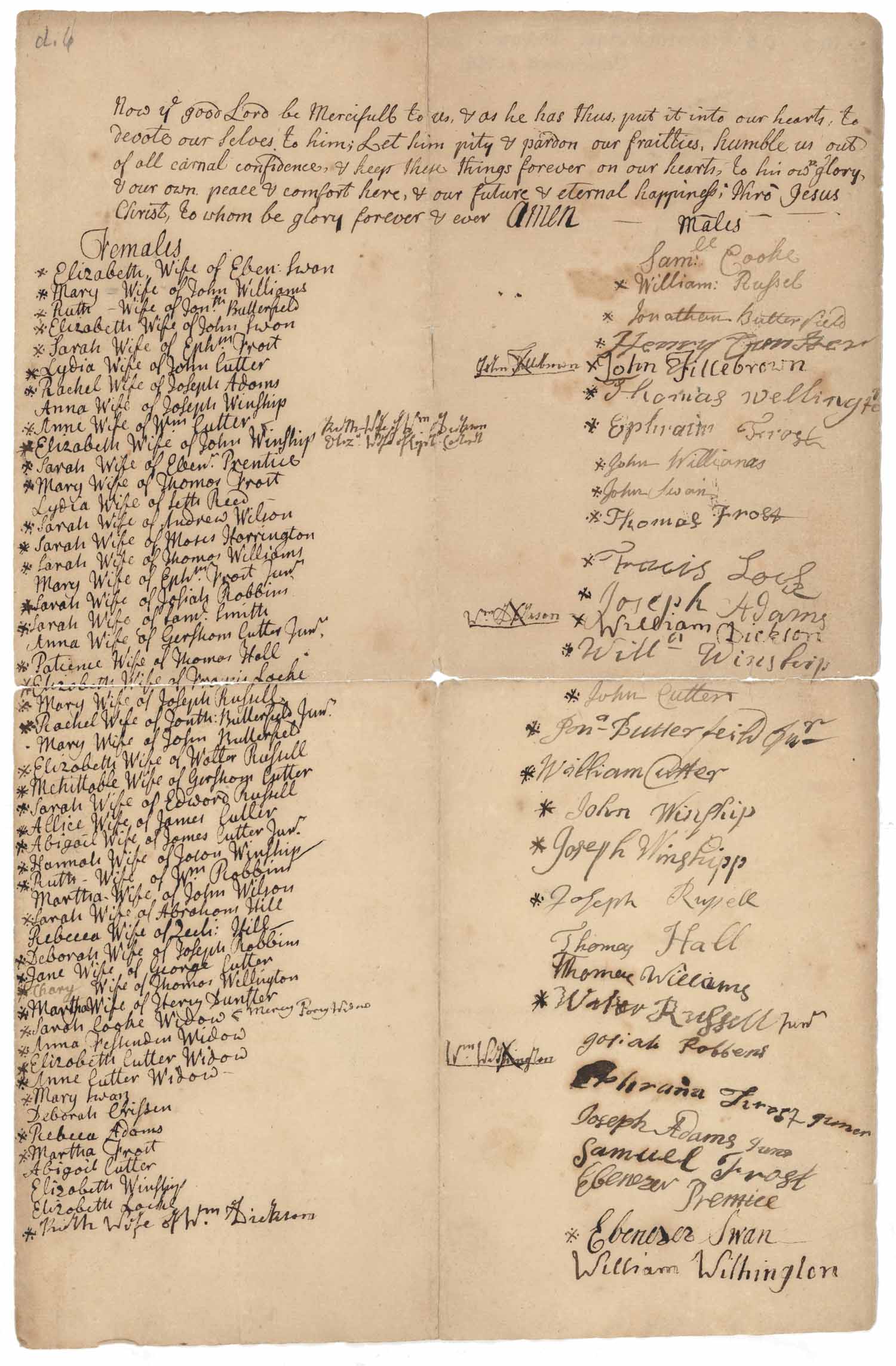