Rev. Samuel Hopkins (1721-1803) was a Congregational minister in the New England area. Born in Connecticut, he was educated at Yale, and later studied under the Reverend Johnathan Edwards (1703-1758). Hopkins preached in Sheffield (now Great Barrington) from 1743-1769, until a difference in theology between Hopkins and his congregation forced him to leave Sheffield. Hopkins then traveled to Newport Rhode Island, where he preached from 1770-1803, when he died. During the Revolutionary War, Hopkins fled Newport, and continued to preach at Newburyport in Massachusetts, as well as Canterbury and Stamford Connecticut (1776-1780). Hopkins is an important figure in Congregationalism, because of the school of theological thought that bears his name, Hopkinsianism, sometimes called New Divinity. Hopkins is also prominent as an early abolitionist, being one of the first Congregationalist ministers to denounce slavery, despite owning slaves at one time in his life.

The digital collections below include three items of correspondence from Rev. Hopkinson, two of them addressed to Mr. Ebenezer Little, a family friend in Newbury, from 1766-1767, and the third addressed to a "Mr. Fuller" in Newport in 1803.

Find out more about Samuel Hopkins correspondence, 1766-1803. View this collection's finding aid at the Congregational Library and Archives 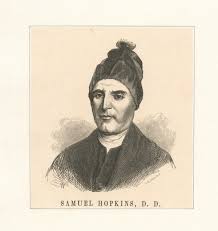