Isaac Watts was born on July 17, 1674. Watts grew up in a nonconformist household and held on to those nonconformist beliefs his whole life. As Oxford and Cambridge were open only to Anglicans, Watts attended the Dissenting Academy in Stoke Newington. Watts was called to be a pastor at the independent chapel, Mark Lane Congregational Chapel, in London. Watts is perhaps best known for his prolific hymn writing; he is credited as the author of about 750 hymns. He also wrote widely read works on theology and logic. Isaac Watts died on November 25, 1748.

Find out more about Isaac Watts and Mrs. Sewall correspondence, 1728. View this collection's finding aid at the Congregational Library and Archives 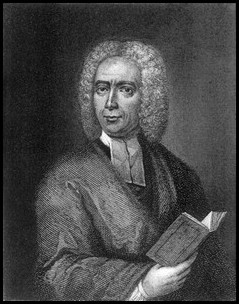