The first religious organization in York, Maine dates back to the establishment of a meetinghouse, or oratory, in the mid to late 1630s. This first organization was likely established according to the Royal Charter given Sir Ferdinando Gorges by Charles I in 1639 and therefore was an extension of the Church of England. The land that encompasses today’s York, Maine was incorporated in 1742 as Gorgeana and became the capital of Gorges’ province. After the death of Gorges in 1647, the Massachusetts Bay Colony claimed Gorges’ land. In 1652 York, Massachusetts was incorporated from a portion of Gorgeana. Little is known about the first established religious organization but following the death of Gorges and the administration of his lands by the Massachusetts Bay Colony, it is likely that whatever remained of that first church organization was either dissolved or slowly replaced with Puritan influence during the 1650s.

The exact date of the establishment of the First Parish Church in York is not known, though it likely dates to somewhere between 1662 and 1673. In 1662, Shubael Drummer, a 1656 graduate of Harvard, became the first Congregational minister in York. Under his leadership, the “second” meetinghouse was constructed in 1667. He was officially ordained as the pastor of the Church of Christ at York on December 3, 1673. In 1692, during King Williams War, a Native American raid on York, also referred to as the Candlemas Massacre, resulted in the death of Rev. Drummer and the burning of much of the town. Apparently the church building survived and in 1698 Samuel Moody was ordained as the second pastor.

During Rev. Moody’s pastorate, the Third Meetinghouse was constructed. In 1710 the 1667 meetinghouse was deemed unsafe and so the town procured funds for a new building which was finally completed in 1712. Under Moody church membership grew to about 300. In 1732 the Second Church was established by Scottish immigrants with Rev. Joseph Moody, son of Rev. Samuel Moody, installed as the first minister. In 1744 the town voted to raise funds through subscriptions to raise a fourth meetinghouse. Plans for construction were stalled until 1747 and construction completed that same year. Rev. Moody’s ministry ended with his death in 1747. He was followed by Rev. Isaac Lyman who was ordained on Dec. 20, 1749 and likewise ended his pastorate with his death on March 12, 1810.

During the 1820s the church underwent a period of instability as disagreements over religious doctrine resulted in multiple waves of members leaving to join other area churches such as the Methodist and Universalist churches. The Sabbath School was established in the 1830s and was soon followed by the establishment of the Sabbath School Library. A religious revival during the 1860s greatly increased church membership. In 1882, the parish came to a decision to move the church so that it physically faced the road. That year it was lifted and placed in the church’s present location in York. In 1951 the church building underwent a major renovation project.

The First Parish Church Congregational, United Church of Christ, in York Maine, continues to serve the community today. It is the oldest still active religious society in Maine. 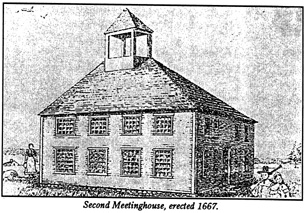