The original founders of the church and town of Rowley, Mass. came from the town of the same name in the East Riding of Yorkshire, UK. Rev. Ezekiel Rogers, the leader of the settlers, was the assistant pastor at St. Peter’s Church of England in Rowley, and a staunch supporter of puritanical observance of the Sabbath. He found himself at odds with the Anglican authorities, who issued a decree allowing the playing of sports on Sundays. He and at least 21 families separated themselves in protest and left for the New World on the ship John, settling in the area in 1638. The land for the settlement was purchased for 800 pounds from Newbury and Ipswich, and the town was officially incorporated on September 4, 1639. The settlers brought with them a high level of expertise in the manufacture of cotton, hemp and flax cloth, and constructed the first fulling mill in America.

The first meeting house was erected at the intersection of Central Street (then Holmes Street) and Wethersfield Street, and dedicated on December 3, 1639. This building was used for Sunday services and Lecture Days (midweek services) in addition to secular town business.

Rev. Rogers became a persuasive leader in the development of the puritanical government of the Court of Massachusetts Bay Colony. He was one of four ministers from Essex County chosen to rule on questions of church and colonial law, and the first recorded preacher at a council of Congregational Churches in New England. Less puritanical members were offended by his religious zeal; among his strong beliefs was that private members should not make speeches in church assemblies.

Rev. Rogers was married three times; his first two wives, Joan Hartopp and Joan Nelson, both died in childbirth along with the child. He married the widow Mary Barker in July of 1651. On the night of the marriage, Rev. Roger’s home, furnishings, library, and church records were destroyed by a fire, popularly believed to be arson by a woman whom Rev. Rogers had refused to marry. Shortly after the fire he fell from his horse and broke his right arm, which became permanently useless. He died in 1660 and was buried in the Rowley Cemetery.

The Rev. Samuel Phillips (Harvard College, 1650) was settled in June, 1651, as a teacher on a salary varying from £50 to £90 per annum. When Rev. Rogers’s health began to seriously decline, Mr. Phillips largely took over the ministry despite his lay status, and the town selectmen ordered that £5 should be paid to him for this service. This led to a protracted 18-year dispute with Rev. Rogers’s widow, who claimed that the funds had been appropriated illegally. The case was decided in her favor by the Ipswich court, but was later overruled by the Massachusetts General Court in 1679.

In 1665, Samuel Shepard (Harvard College, 1658) was ordained pastor of the church, Mr. Phillips still acting as teacher. After Rev. Shepard’s death in 1668, Mr. Phillips was finally ordained as pastor and continued in the role until his death in 1696.

In 1695 the town voted to build a new meeting house, and construction was completed in May of 1697. All notified persons were required to assist with the construction or be fined three shillings per day. This second building measured 50x40 feet and included a gallery and glass windows transferred from the previous meeting house. It also featured benches which were partitioned into men and women’s seating areas.

Construction began on a third meeting house in 1747, which measured 60x42 feet with a steeple on the north side and porch on the south. The interior featured a large pulpit and sounding board and a broad aisle with galleries to the front and sides. In August of 1777 the meeting house was damaged by a lightning strike. Repairs were withheld until 1781, after the end of the Revolutionary War, using funds acquired from the auctioning off of space for additional pews.

In 1841 it was voted to build a fourth meeting house, and a change in location to the corner of Hammond and Main Streets was proposed. The congregation became divided over the issue, with parishioners on the south side of the Ox Pasture Brook favoring the move and those to the north side opposed to it. A vote was held and decided by a single vote, with 24 members in favor of re-location and 23 against. This resulted in a number of dissatisfied parishioners splitting off from the Rowley church and attending service in the neighboring Byfield parish.

The First Congregational Church of Rowley received official incorporation in 1889, and continues to serve the community today as a member of the United Church of Christ. 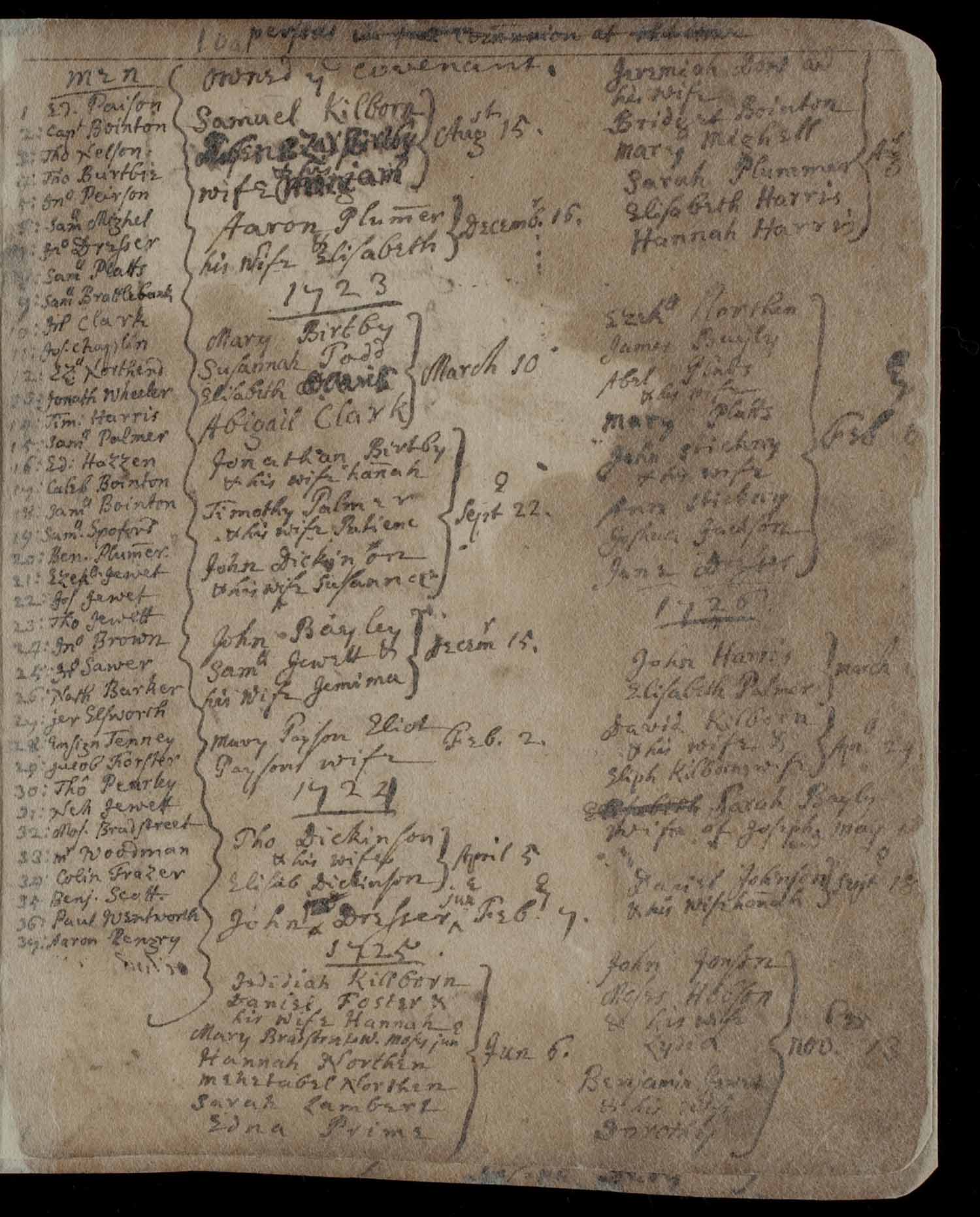