Both the town of Lancaster and the First Congregational Church in Lancaster were established on November 28, 1653, with the signing of a civil covenant by the town’s first settlers. In 1654, the town called Joseph Rowlandson, a recent graduate of Harvard, to be the first minister. He married Mary White, the daughter of a wealthy settler, in 1656 and was officially ordained in 1660. The first meeting house and parsonage were also quickly constructed following the installation of Rowlandson.

In 1676, as part of King Phillip’s War, Native Americans from the Narragansett, Wampanoag and Nashaway/Nipmuc tribes, united under the leadership of the Nashaway sachem Nanomocomuck (Monoco), attacked the Lancaster garrison. During the attack 12 colonists were killed and 12 more captured, including Mary Rowlandson, and a number of buildings were burned including the meeting house. After 11 weeks, Mary Rowlandson was ransomed back to her family and a widely-read account of her captivity was published in 1682.

The second meeting house was constructed in 1684 on the same location as the first. It did not survive long as it too was razed during an attack carried out by Native Americans in 1704 as part of ongoing hostilities between France and England. A third meeting house was constructed in 1706 and the first minister to preach in the new building was Rev. John Prentice who was installed in 1708. During the First Great Awakening, Rev. Prentice kept the Lancaster Church aligned more closely with the traditionalist "Old Lights" than with the revivalist "New Lights." The third meeting house was torn down in 1743 and swiftly replaced by the fourth meeting house that same year. Rev. Timothy Harrington was the minister of the Lancaster church during the American Revolution. In 1777 he was accused of being a Loyalist in part because "he was in charity with a professed Roman Catholick." The charges were dropped after Harrington gave an impassioned defense in which he pointed to the principals of religious freedom.

Due to the advanced age and failing health of Rev. Harrington, the town voted to settle a junior minister in 1792. In 1793 the town voted to accept Nathaniel Thayer as the new minister and he was ordained in the summer of that year. Rev. Thayer was a member of the Unitarian movement and almost immediately began to liberalize the church and make membership into the church significantly easier. Due to the move towards Unitarianism, some members of the church withdrew and formed the Evangelical Congregational Church of Lancaster in 1839.

The digital collections below contain the earliest extant records of the First Church of Christ in Lancaster. All earlier records were lost when both the first and second meeting house were razed during wars between English colonists and Native Americans. The volumes contain valuable records related both to the administration of the church and society as well as the vital records of the members of the church. The records include meeting minutes, committee reports, financial records, baptismal records, marriage records, necrologies, a pew plan, and the various covenants and statements of faith adopted by the church during the eighteenth and early nineteenth-centuries. 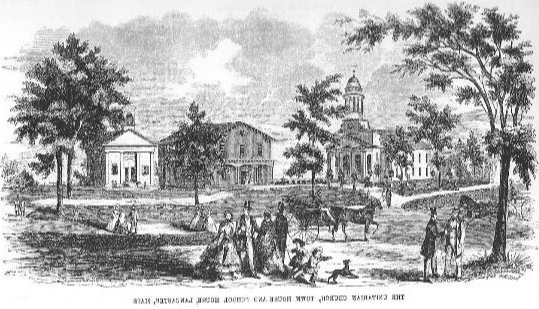