The First Congregational Church of Harwich, Massachusetts, was founded in 1747 when the town of Harwich was split into the North and South Parishes. Efforts to split the town in half had begun in 1744 when families from the south side of Harwich petitioned the town meeting to separate the southern portion into its own distinct precinct. This and several other attempts were denied until a petition to the Massachusetts General Court resulted in the eventual separation of Harwich into two “distinct and separate precinct[s]” effective January 16, 1747. On April 8, 1747, the precinct voted to begin construction of a meeting house with construction being completed the following year. Also in April of 1747, Edward Pell, a Harvard graduate and Boston native, preached to the South Parish. Not long after, he was called by the South Parish to become the first pastor of the South Parish, a call he accepted graciously. Pell was ordained to the office on November 12, 1747. As part of his salary, Pell was given a “convenient hovel.” This structure was finally completed in 1751. Pell perished in 1752 and his widow left to Maine in 1753. At this time, their home became the parsonage and “Ministerial House” for future pastors. It did not remain as such for long as in 1782 the house and barn were sold to cover precinct expenses. The period between 1773 and 1792 was particularly rocky for the church, marked by numerous religious dissensions, shared pulpits with the West Harwich Baptist Church, and general unrest which resulted in the quick succession of multiple pastors during this period.

In 1792, the second meetinghouse was completed after the first had been condemned a year earlier. With the new meetinghouse came a new minister, Nathan Underwood, whose name became synonymous with the second meetinghouse. Underwood served the parish for thirty-six years, the longest ministry at the church. During his time at the First Congregational Church, Underwood expanded the membership of the church, advocated for further independence for the South Precinct, and taught numerous others “scientific” farming. He retired from active service in 1819, though he continued to offer support until 1828 when his relation with the church was formally dissolved. Shortly before his death, Underwood sold his home to the town for use as an almshouse. By 1832 the second meetinghouse needed to be replaced, and by the fall of that year Moses B. Lakeman completed construction. Financial difficulties and short pastorates marked the church’s history until 1851 when the Rev. Moses Hale Wilder began a complete reorganization of the church’s administration. He also oversaw the first expansion of the third meetinghouse in 1854.

The church officially became known as the First Congregational Church of Harwich when the church became incorporated under Massachusetts state law on December 19, 1898 at the behest of the Rev. George Y. Washburn. Washburn, further, celebrated the 150th anniversary of the church by writing a history of the congregation in 1897.

The first third of the 20th century was again marked by financial and parishioner distress with few pastors remaining long and the congregation growing smaller. That changed in 1933 with George Hunt who helped to revitalize the church community. His wife, Ruth Hunt, became the first woman to preach at the First Church after her husband fell ill one weekend. After World War II, Harwich, along with the rest of the Massachusetts cape, had become something of a tourist resort town. The result has been a revitalized church which has become welcoming to locals and visitors alike. The 200th anniversary of the church saw a complete renovation of the third meetinghouse. In 1954, a chapel first built by the Ladies of the Sewing Circle in 1881 was repurposed into the Parish House. In 1961, the church voted to become a member of the United Church of Christ. The First Church of Harwich continues to serve the community today. 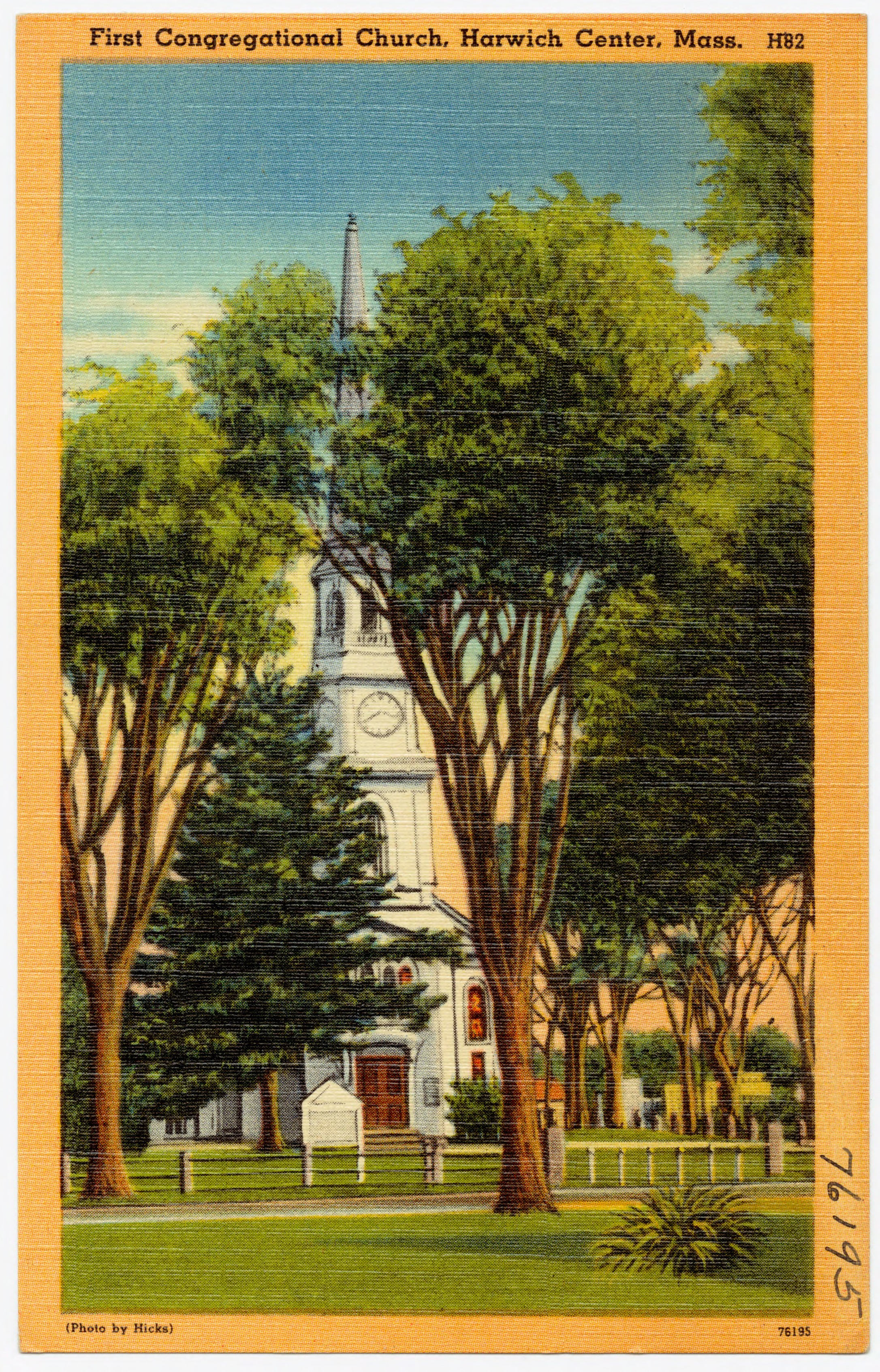