The area which would become Durham, Connecticut was originally known as Coginchaug, meaning "Long Swamp" and was settled by the Wangunk, an Algonquin-speaking people. In 1699, Caleb Seward and his family become the first European settlers in Coginchaug, and in May 1704 the name was changed to Durham after Durham, England. The town was officially incorporated in 1708 by the Connecticut General Assembly in New Haven, which granted "their consent and full liberty to the Town of Durham, to embody themselves into church estate with the approbation of the neighboring churches."

In November of 1709 the town voted to build its first meeting house, measuring 40 feet square. In December of 1710 Rev. Nathaniel Chauncey was called to preach, and was officially ordained as minister of the new church on February 11, 1711. In 1734 the town voted to build a second meeting house measuring 64 x 44 feet, to which a steeple, clock, and bell would eventually be added in 1794. It was erected on the northeast corner of the village green.

Rev. Elizur Goodrich was approved as minister in 1755 and remained in the position until his death in 1797. He was followed by Rev. David Smith who was called and ordained in 1799. In November of 1804, as part of a national trend toward separation of church and town affairs, the First Church and Society split from the town and became responsible for its own finances and governance. Rev. Smith continued in the ministry until his pastoral relation was dissolved in 1832, due to controversies related to his refusal to baptize under the half-way covenant, and the perceived arbitrariness of his disciplinary measures. During this time a significant number of congregants left to join the new Methodist and Episcopal churches in Durham. In July of 1832 Rev. Henry Gleason was invited to take over the ministry, and 136 new members joined after his ordination and before his death in 1839.

A third meeting house, measuring 60 x 40 feet, was erected in 1735 on the site of the current town hall. The building was destroyed by fire on November 28, 1844, and subscriptions were immediately raised for its replacement. However, a dispute soon arose over where the new meeting house would be located, with factions forming to the north and south of the Mill Bridge. Ultimately this led to a schism which resulted in the formation of separate North Congregational and South Congregational churches. The North Church was located north of the former meeting house, and dedicated in June of 1847. The South Congregational Church was located at the former site of the third meeting house, and dedicated on December 29, 1849.

This digitized collection contains loose church records dating from the mid-19th century. They primarily relate to the dispute over the location of the fourth meeting house, after the third was consumed by fire in 1844. The records include petitions, correspondence, legal documents, and lists of subscribers funding two separate meeting house locations. The majority of the petitionary materials were created by southern residents upset about the proposed relocation of the meeting house, which was to be sited farther north than the previous location on the village green. The documents also include calls for separation between the two geographical areas, which would eventually result in the creation of separate North and South Congregational Churches. 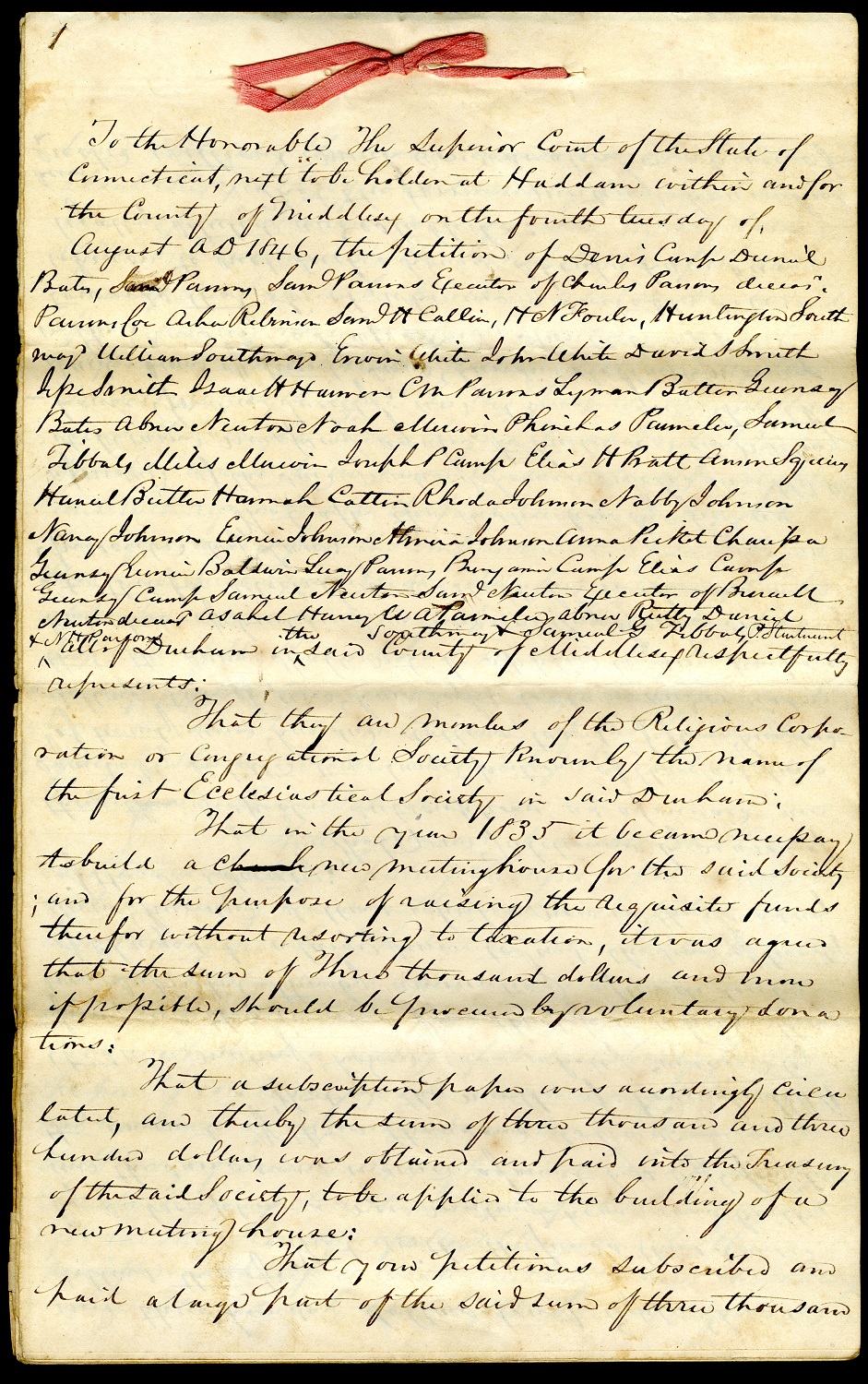