Browse the First Church and Society records in Lebanon, Connecticut

The area which would become known as Lebanon was originally part of a Mohegan settlement called Poquechaneed. The town of Lebanon has its origins with the settlers of Norwich, Connecticut, who wanted to expand beyond the "nine miles square" they had bought from the Mohegan sachem Uncas. From 1663-1692, various parcels of land were deeded to settlers in the area by Mohegan rulers including Uncas and his son, Sachem Owaneco. The town of Lebanon was incorporated by the General Assembly of the Connecticut Colony on October 10, 1700, with the First Church and Society of Lebanon formed in the same year. Rev. Joseph Parsons was called as the first minister and served until 1708.

Nine men formed the original membership of the First Congregational Church of Lebanon, and the first meeting house was built in 1706. Rev. Samuel Welles was the church's second minister from 1711-1718, followed by Rev. Solomon Williams from 1722-1776. By 1724, northerly residents were less willing to travel and pay for the upkeep of a meeting house on the original location at the town common. The First Society's decision to replace the building in that year provoked these members to argue for its re-location to a plot of land owned by parishioner Jedediah Strong. Those living on the south side countered the northerners' requests by invoking an 'ancient agreement' which had been established by the town proprietors, in which it was verbally agreed that the meeting house should never be moved from its current locale on the town common.

The ensuing conflict over the meeting house's location, which lasted approximately 80 years, became known as “The Meeting House War.” Church members formed two factions, known as the North Society (also sometimes referred to as the "village people") and the South Society, who lobbied for the meeting house to remain adjacent to the town common. In 1731, the Connecticut General Assembly ruled that the new meeting house should stand on the original site. However, the North Society continued to lobby their cause through the colonial government, including petitioning to form a separate society. Eventually, in 1804, a conciliatory agreement was reached between members of both groups in which the existing building would be disassembled and moved a mile to the north. However, when workmen came to demolish the building, southern residents formed a mob and placed them under arrest. This was followed over several days by a retaliatory gathering of northerners, who similarly placed southern members under arrest. Eventually the matter was resolved in state courts and the southern faction prevailed, with northern agitators forced to pay damages and the meeting house officially located at its former location on the town common.

The resolution of the long dispute resulted in the construction of a brick meeting house on the common in 1804-1809. The building was designed by the renowned architect John Trumbull and is the only surviving example of Trumbull’s architectural work. The third meeting house was largely destroyed in the hurricane of 1938, and the church sought to restore the ruin to Trumbull's original specifications. Work began in 1938 but was delayed by the Second World War, and was completed in 1954. The church is still active today as the First Congregational Church of Lebanon, and is a member of the United Church of Christ.

This digitized collection contains records largely relating to the 18th-century dispute over the situation of the meeting house, including testimony, rulings by the General Council, and legal documents. There are also records relating to church administration and financial matters. 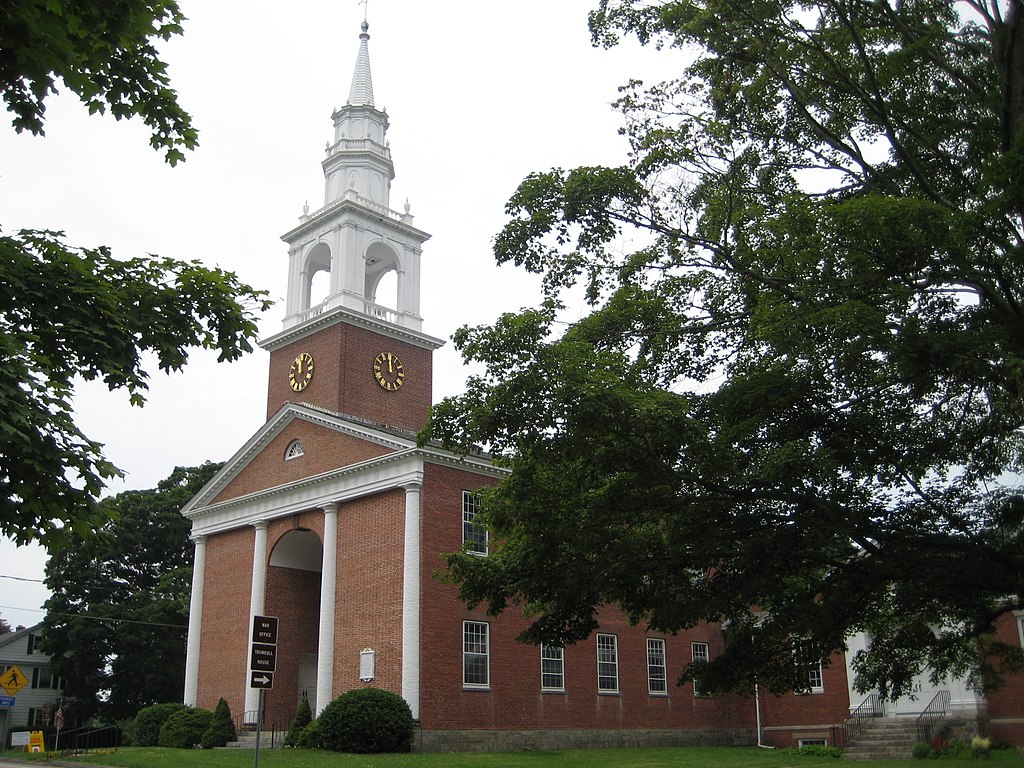