Shutesbury, Franklin County, Massachusetts is located in the west-central part of the state near the Quabbin Reservoir. For at least 2,000 years, Nipmuc towns along the Towanucksett and Quinneticut Rivers called the area covering what are now South Shutesbury, NE Amherst and parts of Pelham "Sanakkamak", meaning "difficult land", according to the Indian Land Archives of Springfield (1660–1835), now housed at Cornell University.

Shutesbury was colonized in 1735, when it was called Road Town, because the original request by Colonists to Boston was to build a road in a roadless area. Road Town was officially incorporated as Shutesbury in 1761. The town was renamed in honor of Samuel Shute, former governor.

A Congregational church was organized on October 17, 1742. The churches in Deerfield, Hatfield, and Sunderland were represented in the council for the organization of the church. A committee was appointed to build the first meeting house, October 26. 1737, and it appears to have been built by 1740.

The first minister was Rev. Abraham Hill (1719-1788), settled in the same year as the church’s foundation. A Loyalist, he was eventually barred from the town pulpit, then dismissed in 1778. He moved to Oxford, Mass., refused to pay taxes as a layman, and won a lawsuit against Shutesbury for his back salary.

After Rev. Hill’s dismissal, the church lacked a minister for many years, and the congregation was greatly reduced. An ecclesiastical council, composed of members from six neighbouring churches, was convened in Shutesbury, Feb. 4, 1806, to resuscitate the church, and it was reorganized with 21 members at that time.

The church’s administrative records kept during Rev. Hill’s ministry are not extant. Anecdotally, one of his daughters informed the second pastor that the records were burnt by the family after they had left Shutesbury.

This collection contains the church records relating to the case of Rev. Hill, 1742-1781. Included are the minutes of the proprietors' meeting in 1742 which selected Hill as minister, with his salary proposals and a copy of Hill's acceptance; the records of several ecclesiastical councils which convened in 1777 to deal with the town's desire to dismiss Hill; and the records of several town committees, led by John Powers and Jonathan Dickinson, organized for the purpose of seeking cooperation from Hill to achieve a legal dismissal. Also included are Hill's notes to the church officers stating his reasons for refusing to participate, the town's requests to churches in nearby towns to call an ecclesiastical council, a summary of the events of the case, the final dismissal, and a 1781 deposition against Hill to establish cause for not paying his back salary. 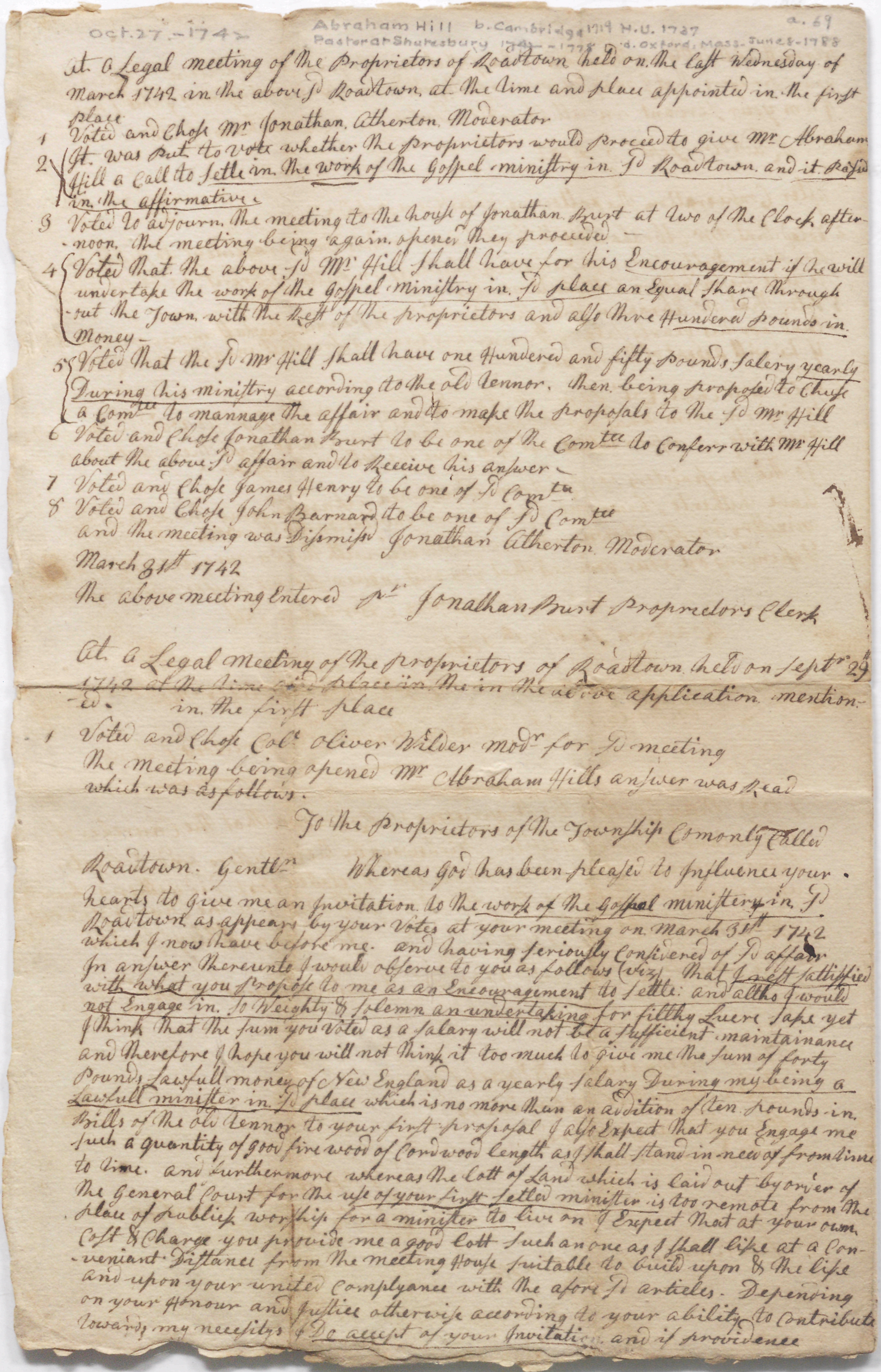