Mattapoisett was gathered as the Second Precinct of Rochester by an act of the Massachusetts General Court in June 1736, though the village did not become a separate town until 1857. The first meetinghouse was constructed in 1737. The early years were contentious, as congregants disagreed over everything from who to accept as their pastor to the propriety of singing "by rule" (using hymnals that include musical notation) and instrumental accompaniment.

The original building was lost in the "great gale" of 1815. The congregation met at the town's schoolhouse for a time until its new building was constructed. Due to a strong revival movement, they soon outgrew this building, and moved to yet another new structure in 1842. In 1836, the first "Sabbath School" at the church was opened. After the town was incorporated, the church officially became the First Precinct in Mattapoisett in 1860, and later simply Mattapoisett Congregational Church. Additional work and expansions to the church and its facilities were completed in the 1950s and 1970s. In 1974, the church acquired a carillon which plays church hymns every day at noon and 6:00pm. The Mattapoisett Congregational Church, a member of the United Church of Christ, continues to serve the community today.

The digital volumes below contain records relating to the administration of the church and precinct, including membership rolls, baptisms, marriages, deaths, church meeting minutes and ecclesiastical councils, and administrative and financial records.

Historical information taken in part from Mattapoisett and Old Rochester, Massachusetts (1907), which also contains transcribed excerpts from these record books.

Find out more about Mattapoisett, Massachusetts. Congregational Church records, 1736-1886. View this collection's finding aid at the Congregational Library and Archives 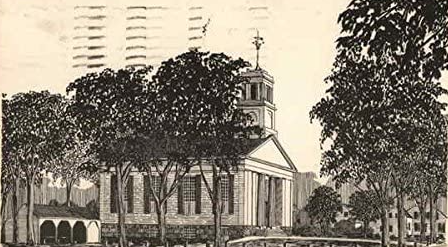