The Abyssinian Congregational Church in Portland, Maine was one of the state's most historically remarkable places of worship. It is most notable for its role as an early African American cultural nexus, as well as one of the northernmost stops on the Underground Railroad. The original meeting house, which still stands today, is Maine's oldest African American church building, and the third oldest in the U.S. after Boston and Nantucket, Massachusetts. The church was the preeminent cultural center for the Black community in southern Maine during the nineteenth century, hosting worship and revivals, abolition and temperance meetings, speakers and concerts, the Female Benevolent Society, the Portland Union Anti-Slavery Society, and a school for Portland's Black children until integration in 1856.

The church was formed after Black parishioners of the Second Congregational Church in Portland expressed dismay at the discrimination they suffered there, namely relegation to segregated seating on the balcony, and general animosity by white members who discouraged their attendance. These concerns were laid out in a 1826 letter to local newspaper the Eastern Argus by six cosigners: Christopher Christian Manuel, Reuben Ruby, Caleb Jonson, Clement Thomson, Job L. Wentworth, and John Siggs. In 1828 they joined a total of twenty-two Black residents petitioning the state Legislature for permission to incorporate their own church. The state granted their request, resulting in the formation of Portland’s Abyssinian Religious Society.

In 1831, Reuben Ruby (1798–1878) sold his plot of land on Newbury street to the Society. This became the site of the Abyssinian Congregational Church, with Reverend Amos Noé Freeman (1810–1893) as its first full-time minister. In 1842, some Black parishioners from the Fourth Congregational Church in Portland merged with the Abyssinian Religious Society to form the Abyssinian Congregational Church and Society. The church played a sizeable role in the abolitionist movement, hosting lectures by Frederick Douglas and William Lloyd Garrison, and was also an important stop on the Underground Railroad given its relative proximity to the Canadian border. Members of the church leadership and the congregation were directly involved in ferrying escaped slaves to safety. In the aftermath of the Civil War, the famous Black abolitionist James W. C. Pennington served for three years as pastor of the church. (firsthand details of Rev. Pennington’s earlier career can be found in the Hartford North Consociation Records).

The meeting house was spared the ravages of Portland's Great Fire of 1866, largely due to preventative action by Ruby's son William Ruby, who first detected the fire and, according to tradition, covered the wooden-shingled roof of the building with wet blankets. By the end of the nineteenth century, however, a number of factors led to diminishing membership and eventual closure, including the presence of more Black churches in the area and, paradoxically, increased racial integration. A tragic and unforeseeable event in 1898 solidified the decline, when seventeen male parishioners died aboard the steamship Portland when it was shipwrecked in a November gale. In 1917, the congregation was officially dissolved by an act of the Maine Legislature. Most of the remaining parishioners became members of the African Methodist Episcopal Zion Church, now known as the Green Memorial A.M.E. Zion Church, located on Sheridan Street in Portland. The former meeting house was subsequently converted to tenement housing and fell into disrepair, but a process of restoration began in the late 1990s, and the building has now been added to the National Register of Historic Places.

The digital materials below include the Church record book and Society record book, largely kept simultaneously to one another. Both volumes include extensive meeting minutes. Church records include member listings, vital records and baptisms, and a chronicle of liturgical occassions. The Society's book records financial transactions in addition to the organization's meeting minutes. 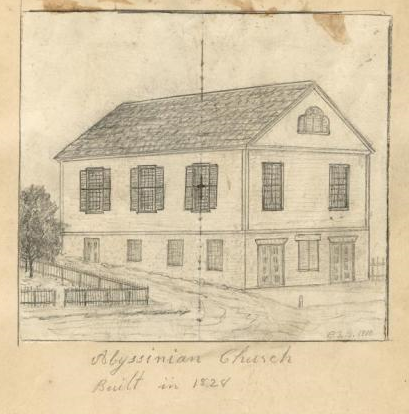